Born in 1829, Standing Bear, a Ponca Native American, was present in a time when tribal wars were common place and hunts brought them into conflict with the Brule’ and Oglala Lakota tribes. These conflicts forced the Ponca to rely more on agriculture and less on the bison hunts that mainly took place in the winter.

By the mid 1800’s the US government was pressuring the Nebraska tribes to sell their land. The continual raids from their Northern enemies brought about disputes of land claimed by the Ponca.  In 1858 the US government had pressured the Poncas’ so much that they ceded much of their traditional lands to the US government. The lands they had left gave little success for farming.  Then in the treaty of 1868 the US government illegally gave the Ponca reservation to the Santee Dakota.  The Ponca were once again pressured to go to “Indian Territory” which is our present day Oklahoma.

By this time Standing Bear was an influential leader, had married and had several children. Through a long chain of events, the Poncas’ relocated to Oklahoma but too late to plant crops and a great number of them died of starvation and malaria, including Standing Bear’s oldest son, Bear Shield. Standing Bear and 65 followers took his son’s body north to the Niobrara River Valley homeland to be buried there.

Brigadier General George Crook arrested the Ponca upon their return to Oklahoma for having left the reservation in Indian Territory. However, Crook was sympathetic to the Ponca when he learned of their condition and gave them time to rest and regain their health.  Several notables and attorney John L. Webster offered services to Standing Bear and filed suit for a writ of habeas corpus in the US District of Omaha, Nebraska.  General Cook was named defendant because he was holding all the Ponca under law.

As the trial drew to a close, Judge Dundy announced that Chief Standing Bear would be allowed to speak on his own behalf. It was at this point that Chief Standing Bear made the statement that has long been remembered and considered a momentous statement.  Standing Bear raised his hand and said, “That hand is not the color of yours, but if I prick it, the blood will flow, and I shall feel pain.  The blood is still the same color as yours.  God made me, and I am a man.”  What a powerful statement!

On May 12, 1879, Judge Elmer S. Dundy ruled that “an Indian is a person” within the meaning of habeas corpus. He made it clear that the federal government of the United States of American had failed to show a basis under law for the Ponca’s arrest and captivity.  It was a landmark case in recognizing the Indian as a “person” and therefore, under the law, they were entitled to rights and protection.

Standing Bear and his followers were immediately freed. This case gained much attention and caused the Hayes administration to provide authority for Standing Bear and some of the tribe to return permanently to the Niobrara Valley in Nebraska.

How sad that a fellow human being had to go to court to prove that he was a man just like any other human being.

As an artist, this story filled me with all kinds of emotion, hence the reason for the title for this sculpture, “I am Man.” May “I am Man” challenge each one of us to honor and value  our fellow man, no matter their creed or color. 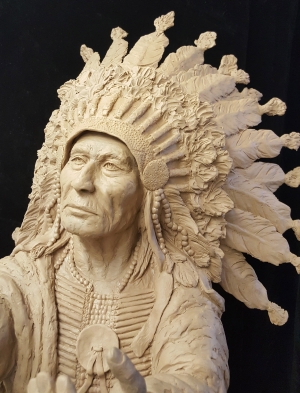